Young creators these days rely on smartphone cameras for their upcoming influential hit. Be it either a quick 15-second cringeworthy TikTok video or a filter-filled meal photo, the smartphone cameras are the one, people are making use of today to do just about anything.

While camera hardware inside a smartphone is being better day by day, so are the apps, processing all the photos and videos shot on them.

The camera is actually an important aspect, coming under consideration these days while buying smartphones.

So, if you’re the one looking for ways to take your social media selfies and posts to next level, my friend, there is big good news for you…

Adobe is all the way to bringing its Free Photoshop Camera App in the App Store and on Google Play. The app is bringing “insta-worthy lenses and camera effects” to phone, along with few AI-powered features, custom lenses, and Photoshop tricks.

Actually, Adobe Photoshop has been a one-stop-shop for most digitally photography enthusiasts, since forever. And this is the reason they planned to launch something for the phone.

Last year, Adobe announced its plans of bringing the magic of photoshop to smartphones, besides launching Photoshop for the iPad. Now despite the fact that Adobe already has a number of mobile apps, some of them with Photoshop branding, this time there’s something distinctive in this case.

As mentioned above, Titled ‘Adobe Photoshop Camera’ app is now available as a free download on Android and iOS, months after being available in a limited beta.

Adobe firmly believes that its new app has a lot more for offering, than usual ordinary photo editing mobile apps.

Adobe Photoshop Camera is powered by the company’s AI-powered platform namely Sensei, that does all the magic.

This Adobe Photoshop Camera comprises a bunch of highly elaborate filters, including the potential of changing your face as well as the world around you.

Some of the filters are truly highly impressive…

Several are capable of identifying the sky behind you and then replacing it with perfect clouds or a magical moon. However, another are capable enough of putting a person inside a Black Mirror-Esque glitchy world… Besides all this, some are there that can make you look as if you’re in a comic book.

This best camera for Photoshop, in reality, has very little to do with Adobe Photoshop APK, despite the fact that both have to do with photos and both are apps. Both can get used for some basic photo editing, like adjust, contrast, saturation, exposure and etc.

If you’re amongst those, who do wish to bring adjustments, then you guys should be happier… As the Adobe Photoshop Camera comprises a magic wand button, which automatically dials in changes for you. So, overall, the situation with Adobe Photoshop APK is like you don’t have to worry about the actual settings.

Note: The app can’t record video. This is actually bad, as the effects would be really pretty fun.

With this Adobe Photography App, Adobe mainly aimed at bringing the magic of PSC Photoshop directly to the camera’s viewfinder, Adobe CTO Abhay Parasnis said this once…

With this adobe camera raw, the tricky or complicated thing for Adobe would be getting people to make use of it, instead of the various filters available inside the social apps, people use every day. Regardless of the fact that Photoshop Camera comprises some really cool gestures, Adobe has still tried to compete with basic social media apps like Instagram and Snapchat. This is mainly because the apps do consist of some really awesome photo editing features.

Note: Many people compared or are comparing this Adobe Photoshop Camera to Google Camera, developed by Google for Android. However, lemme tell you, it is much more advance than that…!! This you will find yourself in the future…!!

We don’t see ourselves in competition with social apps or camera apps.

Further, he hinted, in the future, people can expect Adobe working on partnerships, in order to get its filters inside of other apps… perhaps, built into some phones’ native cameras…

Overall, Adobe Photoshop Camera is a really fun app to play around with.

One thing about Adobe Photoshop Camera is clear that the heart of all its magic is Adobe’s Sensei Platform.

This AI-driven platform doesn’t just empower the Photoshop camera app… but also enables a number of useful features on its suite of multimedia editing apps on the desktop. With this adobe ai camera apk download, capturing an awesome photo yet require some photography skills. However, beyond that, the smartphone app can handle just about everything.

Moreover, Adobe Photoshop Camera app allows developers to create their own lenses. One can selectively download and install these adobe lenses, within the app. Each adobe lens does offer a number of variations that can get further customized, based on the user’s preferences.

Some of these lenses are optimized for selfies, however, others do require user involvement to fire up the smartphone’s rear camera. Lenses such as Dreamcatcher and Pop Art completely modify the way photos look like, without any hard work from the user end.

Note: Adobe tied up with Billie Eilish to let users add angel wings, along with appropriate backdrops to their respective photos.

You can shoot your new photos, can edit them, or apply lenses to them. Moreover, you can also edit the existing photos you shot using your respective smartphone’s native camera app. Despite the fact that apps remain free, Adobe does offer its cloud storage plans, alike an in-app purchase within the app.

Adobe Photoshop Camera includes the capacity of living up to its expectations if there are no stability issues in the beta version.

As discussed above, the adobe Photoshop Camera Apkpure is not here for competing for social media apps. So, it of course won’t replace the iconic Instagram filters or AR-Powered Snapchat lenses. However, do adds another dimension to the world of mobile photo editing (especially for creators).

OK… so this about the great awesome features adobe photoshop camera comprises… despite all this, there is one problem that Adobe might encounter… i.e., the confusing array of adobe Photography apps, it is offering on mobile app stores.

Regarding this camera installation, device (iOS or Android) must meet the minimum technical specifications stated below:

Adobe Photoshop Camera is available in the below-listed languages:

Some Other Adobe Apps for Photography

Note: I have noticed people querying about Adobe Photoshop and Lightroom… there similarities and dissimilarities…

So, here’s Adobe Photoshop and Lightroom

Actually, when it’s about workflow, Lightroom is arguably better than Photoshop. Via using Lightroom, one can very easily create image collections, keyword images, or can share images directly to social media… batch process and etc. In Lightroom, one can both organize a photo library and can edit photos.

Ok… so this all about Adobe Photoshop Camera… Now let’s have a quick look at the conclusion so that you would have a perfect idea of what this photography app is.

With this photography app, Adobe aims at introducing its ecosystem through the smaller, less intimidating apps to people. With this Adobe’s hopes are high that eventually some of the users of this app will convert into paid professional tools.

Parasnis on this said,

The strategy is working really well… and in the future, Photoshop camera would be our next target.

So, here finally ends up my blog…

Hopefully, you enjoyed reading it… and yes, if do have any queries in mind, kindly feel free to ask us in the comment section below 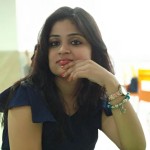 I Nishi, am a focused professional Tech blogger and Digital Marketing Expert at Candent SEO. Am a technological writer with around half-decade of experience in writing. My writing covers everything from online marketing tips to solutions to technical issues (big or small). Known for writing complicated topics in simple language.